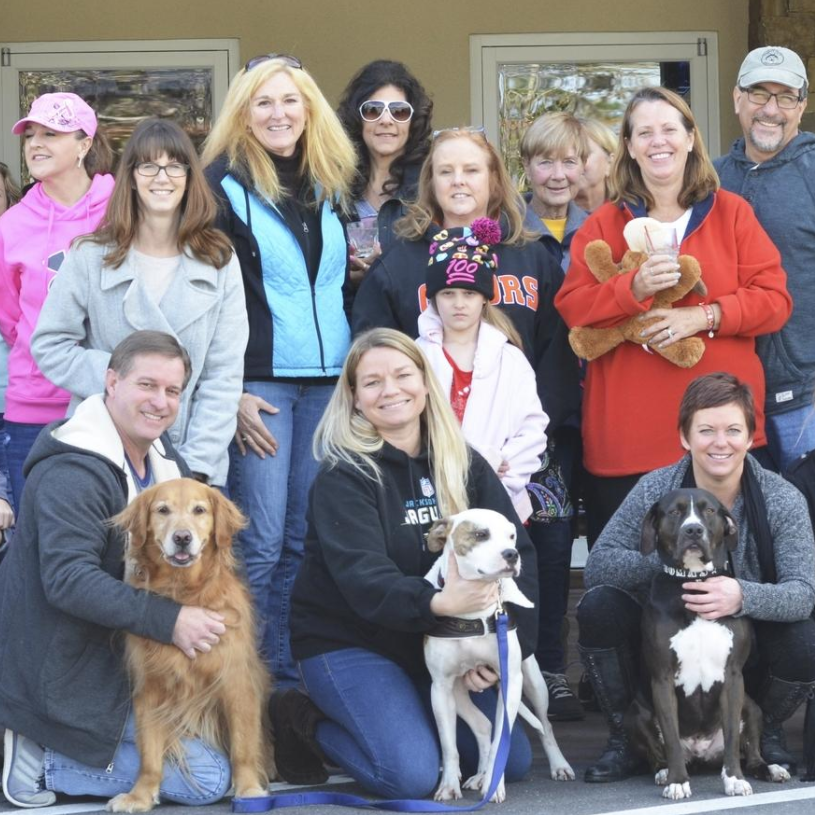 Dozens of local animal lovers turned out on the chilly afternoon of Jan. 29 at an event hosted at the Half Wall beer house in Port Orange, to meet Jason, a seriously neglected and abandoned dog who has since recovered and is about to start a new life in a loving forever home.

Some of you may remember I shared Jason’s story when he was first found at the beginning of September 2016. He was chained up and abandoned at a vacated property, in the dirt with no food, water or human contact for weeks until he became a skeleton. Jason was discovered in this terrible state by animal advocate and DeLand Police Lt. Greg McWhorter, who was extremely shocked by Jason’s appearance and quickly raised the alarm for help. Lt. McWhorter was also at the event on Sunday to wish Jason well on his new journey and give him a hug goodbye!

Fortunately Jason was taken in by the local group, Sophie’s Circle Dog Rescue, and went to live with Sophie’s Circle volunteer Jen who became his foster mom during his recovery. Jason collected a huge social media following along the way and some people may say, “Why so much attention on just one dog? There are so many more like him out there!”

This is absolutely true but some cases are very compelling and just take off, so if people want to follow Jason’s journey then sobeit!

Jason is a poster dog for all the others like him who also are suffering and his story raises awareness, bringing home the harsh reality that neglect like this is happening in our own backyards right here in Volusia County. His story reinforces the need to support our local animal rescue groups and animal agencies who work so hard every day to relieve these animals from suffering and prepare them for new lives.

When Sophie’s Circle Dog Rescue was approached about Jason they were told that he had no hope unless they took him and would probably be euthanized. Sophie’s Circle was not going to let that happen! Despite best efforts though, there was not enough evidence in the case to link to any particular person to this crime, so nobody will be punished for Jason’s suffering which I think is a travesty and tragedy. Regardless of his past, Jason is very trusting and loving. At his meet and greet, he kissed babies, played nice with other dogs who approached him and licked everyone who petted him (he should be a politician).

The good news is that although Jason’s foster mom loves him very much, she has in fact found him the most amazing forever home where he also has a new ‘doggie’ sister! He has met his new owner several times and both of them are very excited about starting their new life together this week.

Follow Sophie’s Circle Dog Rescue on Facebook or visit their website at sophiescircle.org to stay up to date on Jason and all the other animals they help. You also may want to adopt a pet, or even make a donation towards this great charitable cause.