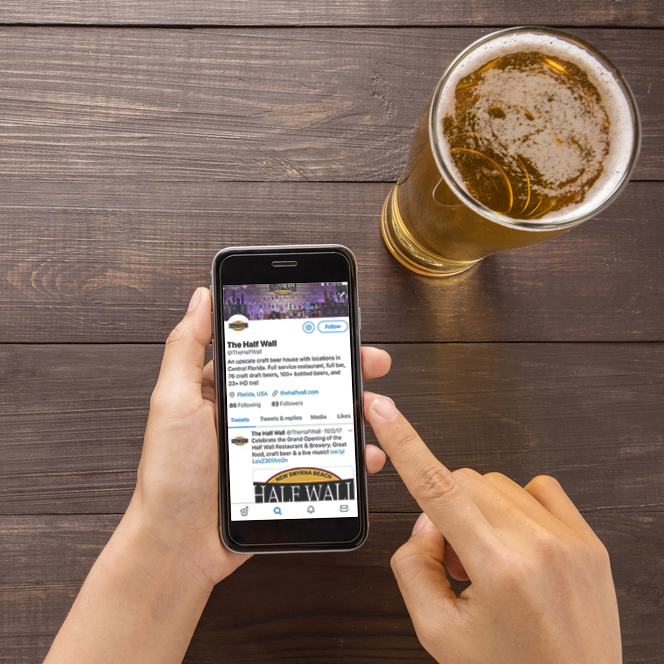 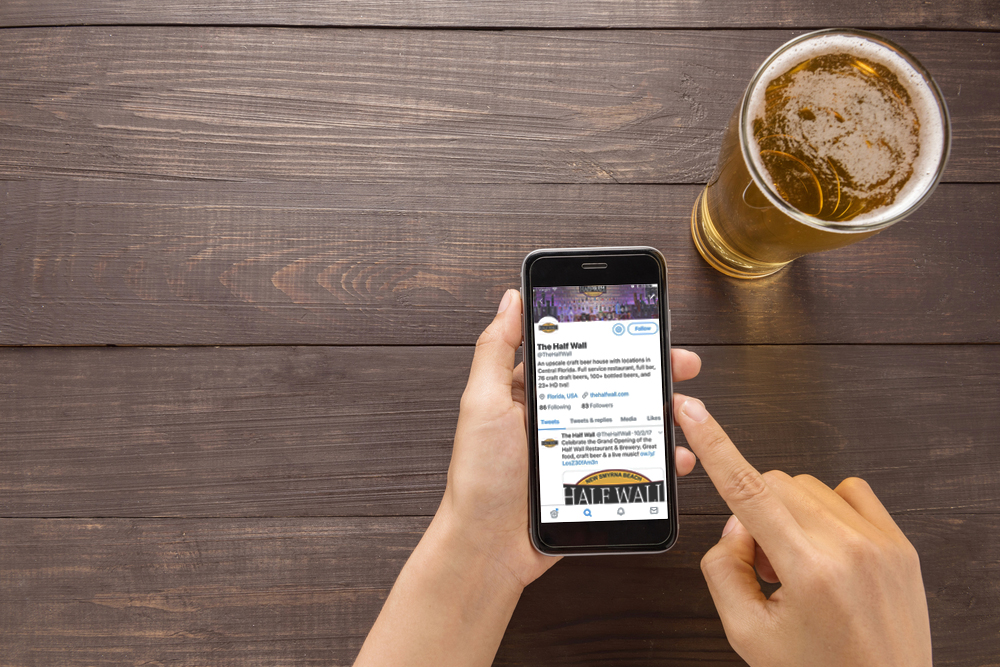 While Tweeting and drinking beer don’t always mix well together, Twitter is a great platform for beer lovers to come together and read up on all things craft beer. There are entire Twitter communities of craft beer enthusiasts Tweeting everything from daily taste recommendations to home brewing tips that will help propel your knowledge of craft beer.

Whether you’re guilty of committing a TUI (Tweeting under the influence), a self-proclaimed beer connoisseur or just someone who wants to read up on craft beer to impress people at parties, here are 25 Twitter accounts you should be hitting the follow button on.

1. Local Bars- A good starting point for your Twitter-following spree is a round up of your favorite local bars and bottle shops. Most bars keep their Twitter followers updated on any special events and weekly deals you would otherwise miss. If you’re from the area, start off by giving us a follow at @TheHalfWall and @HalfWallBrewery.

2. Dogs on Tap- Next on the list is a fan favorite that combines our love for dog pics and craft beers. @DogsOnTap posts daily pictures of mankind’s two best friends: pups and brew.

3. Beer Advocate- If you’re in search for all things beer-related, whether it’s recipes for cooking with beer or just new craft beer recommendations, @BeerAdvocate is the account for you.

4. The Brooklyn Brewery- On top of being an actual brewery based out of Brooklyn, @TheBrooklynBrewery also runs a popular Twitter account that dishes out industry news and projected beer trends.

5. Craft Beer- @CraftBeer is a Twitter account run by Josh Mishell and Tamre Mullins, a power duo that provides commentary on anything beer related. This account is full of craft beer opinions and suggestions for those who don’t know which beer to try.

6. Good Beer Hunting- Heard of a new craft beer you want to try out but not sure if it will be worth the buy? @GoodBeerHunting is aimed at people who want to read up on different opinions on breweries and brews from around the world.

7. Home Brew Chef- If learning how to cook with beer was one of your New Year’s resolutions then following @HomeBrewChef is the right move. Sean Paxton shares his insights on what techniques make for the best brew inspired dishes.

8. Beer Pulse- @BeerPulse is mainly targeted for the business side of the beer industry. It’s known throughout Twitter as the industry leader in beer and brewery news.

9. Greg Koch (Stone Brewing Co)- If you want insight into everything that goes into being an independent brewery owner and operator, then following Stone Brewing Co’s CEO and co-founder @StoneGreg would grant you just that.

10. Lucy Saunders- Did you know piroshkies and beer pair well together? You would if you were following @LucyBeerCook on Twitter! Lucy Saunders specializes in finding what foods pair best with certain kinds of beers.

11. Don’t Drink Beer- If you’re looking to mix your love of memes and your love of beer together, @DontDrinkBeer will keep you occupied for hours by scrolling through pages worth of hilarious craft beer themed memes.

12. Dr. Bill Sysak- The beer pairing pro behind @MasterPairings, Dr Bill Sysak, actually has a Cicerone certification. A Cicerone is someone who essentially has a degree in knowing all things beer. Give him a follow for beer expertise and commentary.

13. New Belgium Brewing- A long-time favorite amongst craft beer drinkers, @NewBelgium is a great twitter to follow if you simply want to learn more about the brewery’s ale varieties and behind the scenes brewing process.

14. Kona Brewing Company- @KonaBrewingCo is famous for brewing up liquid Aloha, but their Twitter is also famous for being chuck full of beer related fun facts and head-scratching polls.

15. Belgian Smaak- If Belgian Beer knowledge is what you seek, there’s no better Twitter account to follow than @BelgianSmaak. They update their newsfeed daily with links to blogs exclusively for Belgian beer.

16. Hold My Ale- If you’re not familiar with the hold my beer meme then you have some serious catching up to do. @HoldMyAle Is a Twitter that has hundreds of GIFs that play off the popular meme. Scrolling through this Twitter page will keep you laughing for at least a few hours.

17. Untappd- The Twitter account behind the app @Untappd tweets about all things beer, including the bars and craft brew brands that are becoming popular. If you want to know what beers are becoming popular in your area, this might be a good place to start.

18. Brew Your Own- @BrewYourOwn‘s Twitter feed is riddled with DIY tips and tricks to make the most out of your independent brewing passion project. From how to steep your beer to how to properly cap it off, this Twitter and accompanying blog is essential in any home brewer’s newsfeed.

20. Home Brew Finds- Finding the right tools and equipment to independently brew at home can be hard if you’re a beginner. If you’re not a beginner, you know that the right tools can get expensive pretty quickly. @HomeBrewFinds is the go-to Twitter for daily internet deals and markdowns on all the necessary equipment.

21. The Brewing Network- The brewing network is a beer community that is equal parts humor and news. @TheBrewingNetwork brings you weekly videos, event news and podcasts about craft beer to your Twitter feed.

22. Home Brew Association- The @HomeBrewAssoc is an account that is jam packed with blogs and recipes for those looking to start their own home brewery.

23. Beer 2 Infinity- @Beer2Infinity is another great account to follow for news stories and information on breweries, pubs and bars from all across the nation.

24. BeerSmith- @BeerSmith Specializes in software for craft beer brewing. Also has tips and tricks on what waters and temperatures are best for brewing certain types of beers.

25. Home Brew Talk- And last on our list is @HomeBrewTalk. This online magazine is perfect for those who want to read up on opinions, stories and tips from other fellow home brewers around the world.