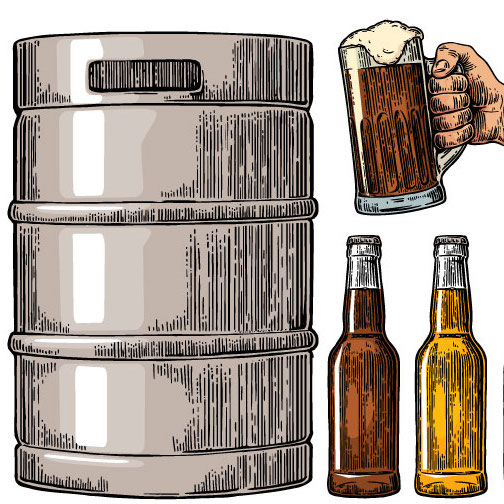 Even though beer has been around for thousands of years, people still seem to spread lies about this delicious, popular beverage. We like to give people the benefit of the doubt and assume they don’t mean to do it. They’re just proclaiming the common misconceptions they’ve always believed about beer.

Every so often these myths can be heard echoing through bars and beer halls. It’s time to put an end to it! We’re here to debunk some common beer myths and give beer lovers, new and old, the truth.

While Big Beer ads may have you fooled into thinking that icy, frosted mug is the best way to enjoy beer, that’s actually the perfect way to ruin a potentially good brew. Ice cold temperatures actually numb your taste buds and can hide some of the aromas in your beer!

The proper serving temperature will actually vary depending on the type of beer, so you can follow this guide from the American Homebrewers Association to help you serve brews at the perfect temperature!

Wrong and Wrong. People tend to think that the darker the beer the higher alcohol content it will have. That’s simply not true. In fact, a Guinness Draught has an ABV of only 4.2% – that’s lower than a Budweiser! The color of your beer has absolutely no correlation to its strength or alcohol content, it just has to do with the roast of malts that was used.

We’re sure you’ve heard the incorrect sentiment that “beer out of a can tastes like metal”. While beer from a bottle might taste better to some, scientifically it is much better suited for a can.

Aluminum cans keep out light better than a bottle and keeps out air much better than a twist-off cap. And, you can see that most craft breweries agree, as more and more of them opt for canning instead of bottling.

Ah, yes … the ever popular mantra of college kids everywhere. When you start out drinking beer, you drink at a certain pace. If you switch to liquor you continue drinking at that pace. You are drinking just as fast with a beverage that has a much higher alcohol content, getting you drunk faster and leaving you with a wicked hangover the next day. Clearly, that mantra is wrong! It really doesn’t matter what order you drink them. It’s about the total amount of alcohol you drink.

We’re sure you have heard the term ‘beer belly’. While excessive beer drinking can lead to weight gain, beer (in moderation) isn’t any more responsible for the size of your gut than the pizza and fries you love to eat. A lot of it comes down to metabolism.

When you drink a couple of beers before or during your meal, your liver is focused on metabolizing the alcohol. Fat metabolism is put on hold causing the excess food calories to sit around and wait to be burned.

The truth is, moderate beer drinking isn’t directly correlated with gaining weight. And, it actually comes with some surprising health benefits, such as:

Now that you know the truth about beer, we invite you to come into one of the Half Wall locations and prove these myths wrong!